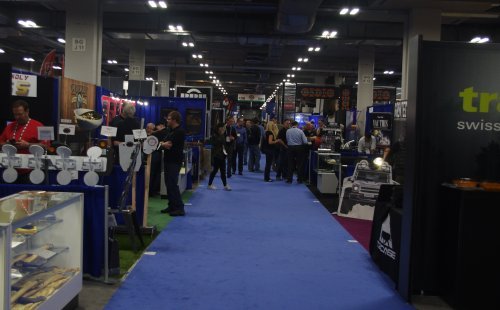 It is day two of the 2017 SHOT Show and there are still miles of products to see. Today we are once again sharing some of the new and interesting products out there, while trying to hunt up a few “hidden gems” of the show. 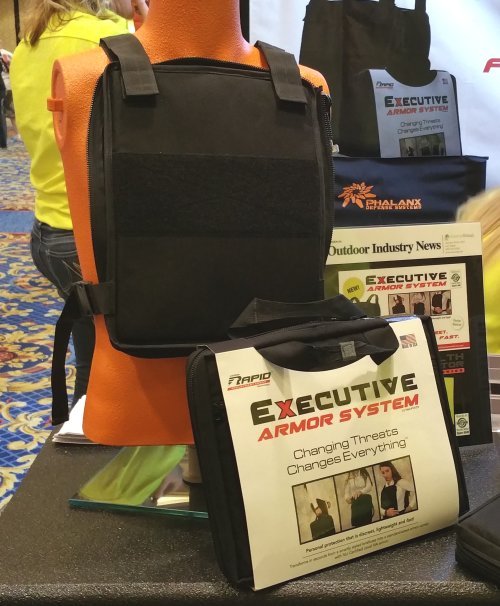 Rapid Deployment Armor is showing off the Executive Armor System this year. It looks like a universal, plain laptop bag. However, it unzips open and goes over the head to turn into a vest with level IIIA front and rear panels. It only takes about fifteen seconds to go from carrying the bag to wearing the vest. 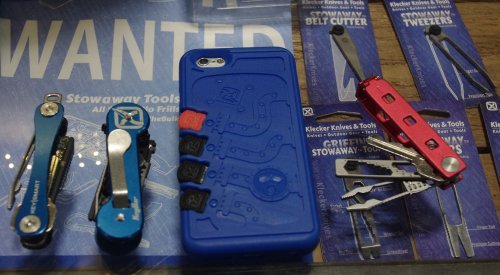 Stowaway Tools is showing off their growing set of tools which let anyone build the Swiss Army style knife of their dreams. There is a also a phone case which can hold four tools on the back, a carabiner and a variety of key holders that can be tricked out as well. There are over twelve options which currently include things such as a belt cutter, fire starter, wrench, tweezers and a knife blade. 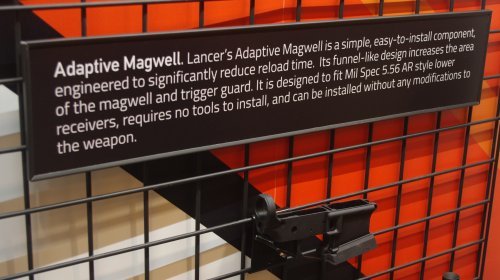 Lancer is showing off a few new items this year, but their “must have” on display is the Adaptive Magwell. This adds a flared magwell, a feature often found on billet lowers, to the standard forged models. From just playing with some of the samples on display, it looks like a solid design and adds one of the few features that I’ve really been missing on my Mil Spec lower. 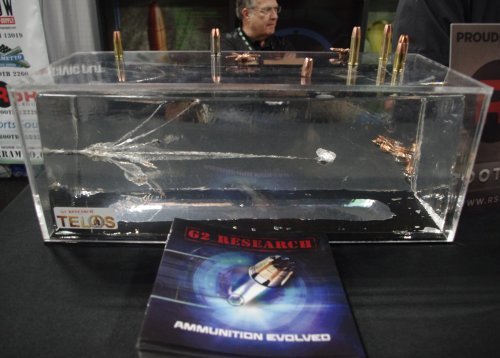 G2 Research has a new, scary looking pistol round out for folks to check out. The Telos is designed to be their cost-effective option and will be available at a significant savings over the existing defensive offerings. It is available in 38 Special, 45 Long Colt, 357 Magnum, 380 ACP, 45 ACP and, of course, 9mm. 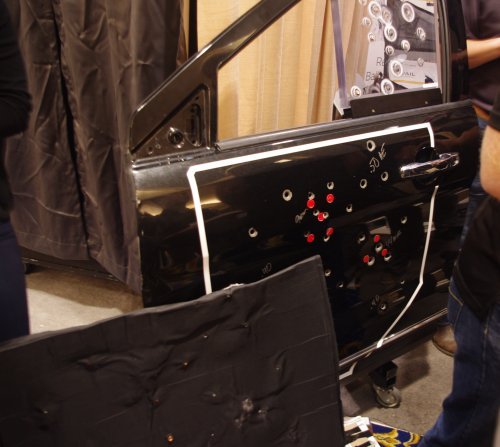 Angel Armor has the most eye catching ballistic display seen today. They are showing off the Avail door panel, which basically drops into a car door as a quick upgrade to level IIIA protection. The test door is covered in holes up to 50AE, while the Avail panel is not.

Kriss USA has a wall covered with the different versions of their new Defiance DMK22. It is a 22LR rifle that uses many standard AR parts, such as triggers, and also works with 10/22 barrels. This could be the beginning of a crazy upgrading adventure. 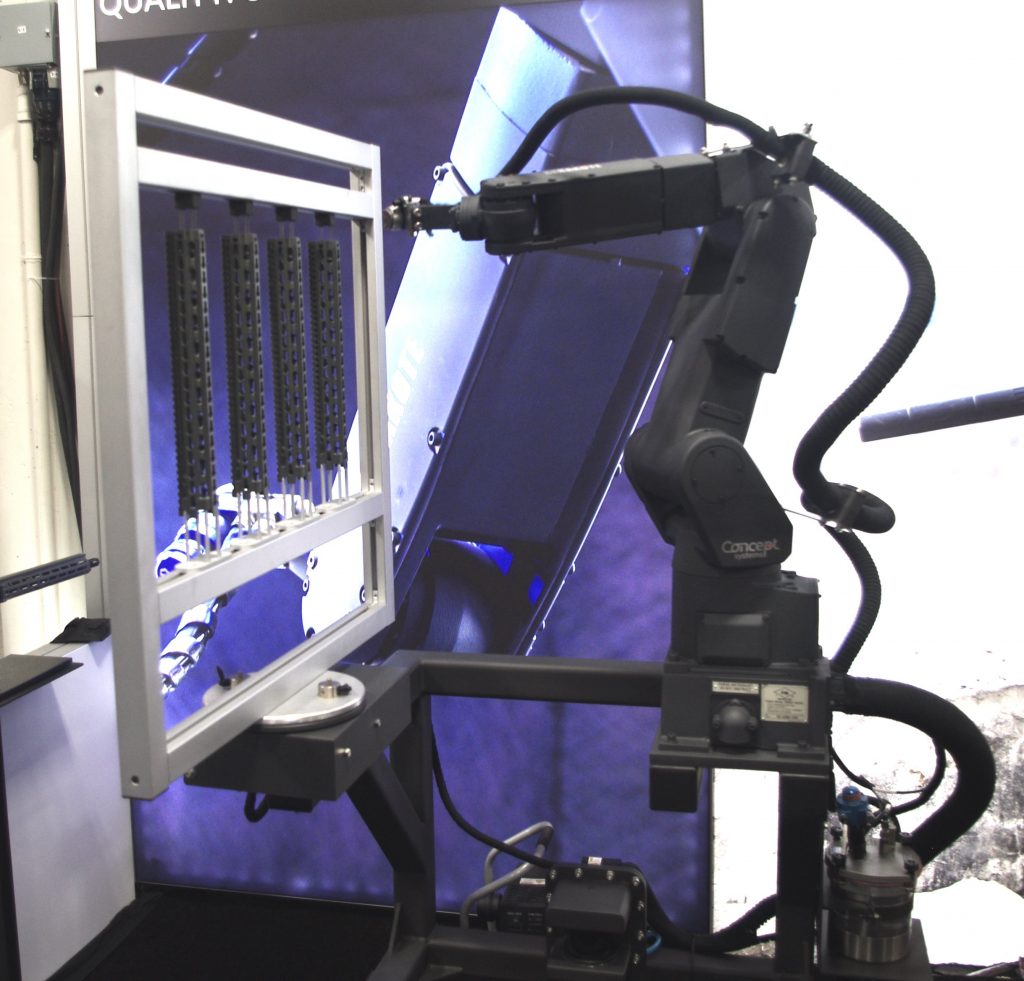 Cerakote Coatings brought their gun parts painting robot to this show. This is not the kind of thing that I could make up, even on a good day. Seeing this thing go nuts painting multiple handguards, like a seasoned professional, in just a matter of seconds is impressive. 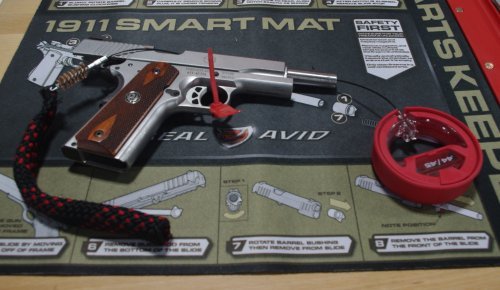 Real Avid is showing off their new twist on the BoreSnake style cleaner. The Bore Boss case serves as the handle and storage compartment for the cleaning cable, brush and mop assembly. This not only makes it easier to pull the cleaning tail through the barrel, but also provides a place to stash away the solvent soaked tail after use. There are ten different sizes which should cover all the common calibers, from .22 to 12GA.

The best looking rifle of the day is the BFG handguard model on display in the Unique ARs booth. The design really jumps out, but doesn’t get carried away. Unique has a few new handguard designs this year and is also starting into making their own complete rifles.

Steel Will had some of the best finished knives that we saw today. Surprisingly enough, this includes the Cutjack from their new line of “imported” models. Although most of their knives are brought over from Italy, they are going to be outsourcing the production of a few new models to Asia, with the goal of offering a lower price point line. Final quality control is still going to be done in the US, so they are hoping this will allow them to keep their high standards across all models. 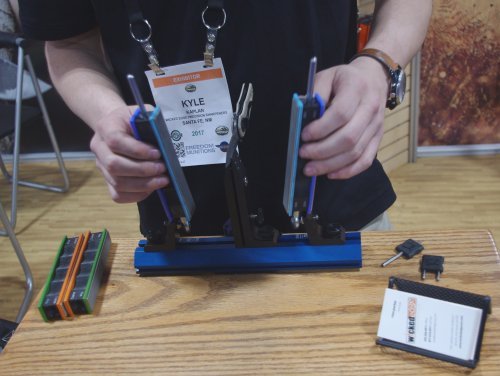 Wicked Edge is showing off their newest sharpener, the WE50. It is not on the market until later this year, but will be offered at a lower price point than the existing models. Although it looks like there would be some practice involved to get proficient, their system takes all of the guess work out of finding angles and turns sharpening into more of a science than an art form.