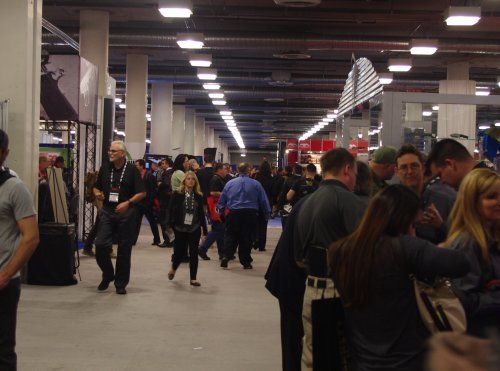 This year’s SHOT Show in Las Vegas is once again raising the bar as the largest yet, with 1,600 exhibitors. This works out to about twelve and a half miles of isles to walk. Once again, the predominant weapons system seems to be the beloved AR15 and all of the big players in the firearms industry are present. So, we thought that we’d start off with a list that is focused on new and interesting products and some things that just shouldn’t be overlooked. 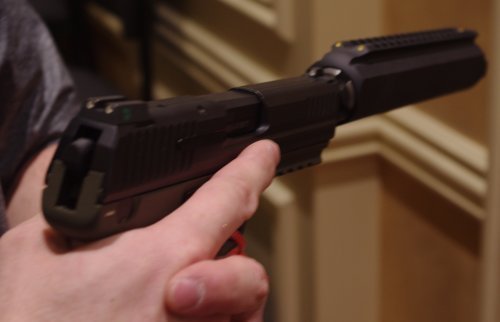 Alpha Dog Silencers has one of the more interesting pistol can designs that we’ve seen so far. They have integrated a top rail, with built in sights, onto the exterior of the suppressor. This provides an alternative to replacing the existing, short sights that come from the factory on most pistols.

Gemtech is adding the Integra AR15 integrally suppressed upper receiver to their lineup this year, which is going to be distributed through Silencer Shop. This looks to be about as easy as it can get to have a one stamp 5.56 or 300BLK suppressed upper with a 16.1″ barrel length. This setup runs a monocore can, so the single piece baffle stack just unscrews from the front of upper. 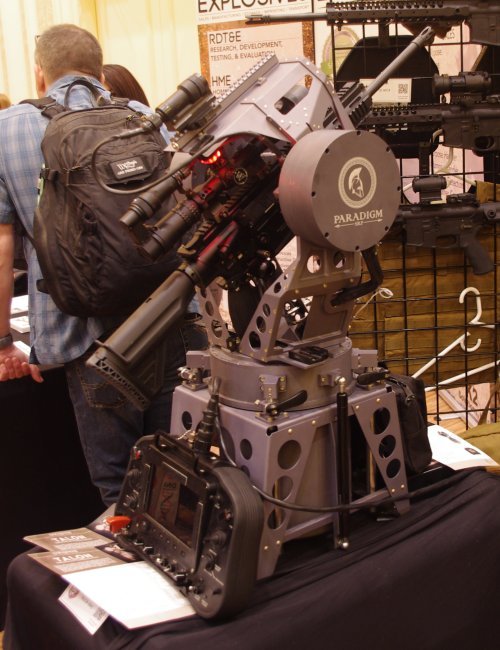 Paradigm SRP has their Talon gyro-stabilized weapons platform on display this year. It is designed to allow for precision shooting from moving vehicles, such as helicopters, boats and trucks. The system is designed to work with your personal weapon of choice and supports night vision. The included remote has a seven inch HD display that can both look through the weapon’s scope and show wide angle views. 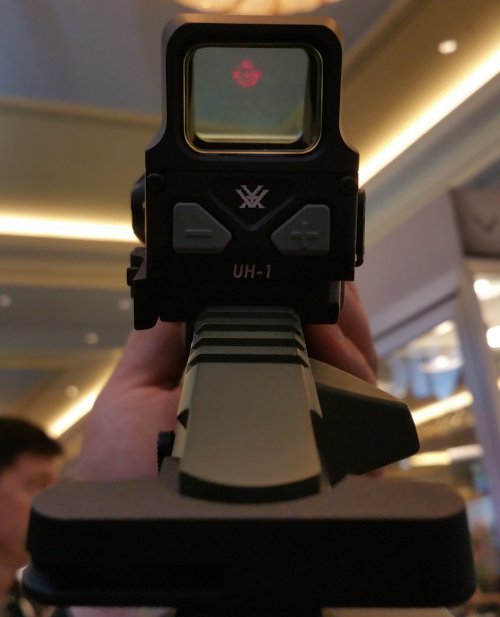 Vortex has their new Razor AMG UH-1 on hand. It is designed to have the best features of both a red dot and holographic sight. This design is supposed to be more durable with longer battery life than the competition. The UH-1 also works with rechargeable LPF123A batteries and has an incorporated micro USB port for refueling. 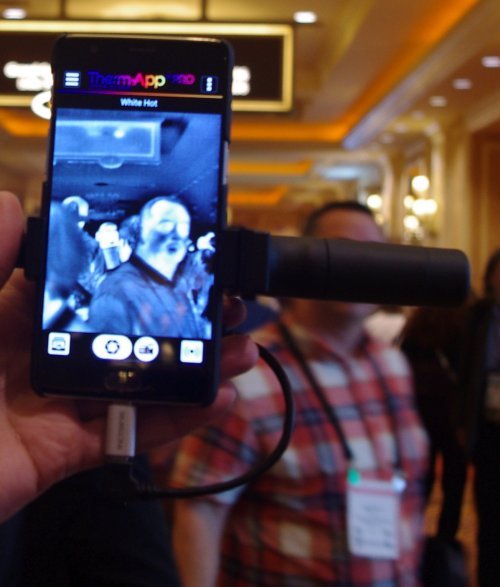 Opgal brought the Therm-App Pro, which is a thermal imaging device that runs off of an Android smartphone. The latest upgrade runs at 640×480 resolution. It is weapons mountable and, when we were messing about with it, is sensitive enough to detect footprints on the floor and fresh handprints on the wall. 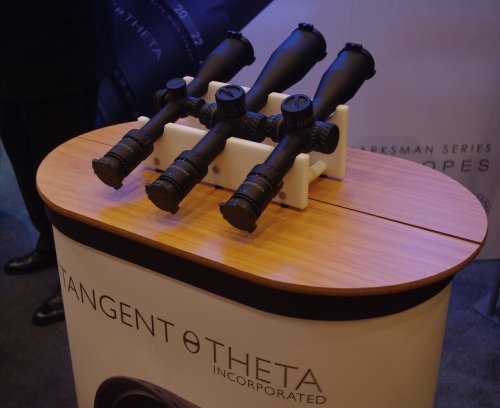 Tangent Theta brought all three models of their very nice looking and smooth running scopes. They are one of the lesser known high-end scope manufacturers out of Canada, but are worth a look if you are considering a serious optics purchase. They have some really neat new things in the works for later this year, but are keeping the details under wraps for now. 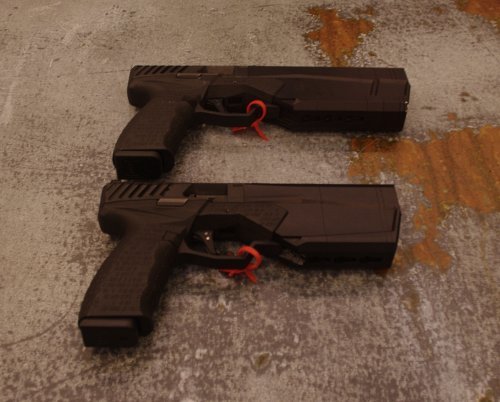 SilencerCo is finally happy with the Maxim 9, their integrally suppressed 9mm pistol. It is adjustable in length, field strips easily and comes with built-in keymod slots. There are even a few holsters available that are designed to work with the much larger footprint of the weapon. 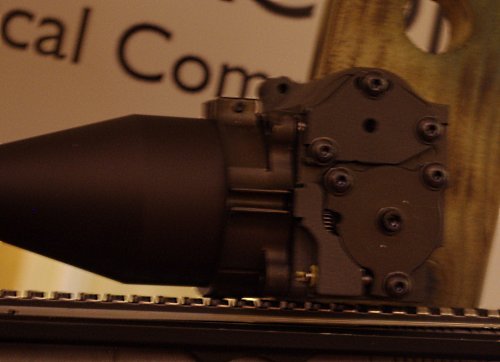 TACOMHQ has a new product which is basically a periscope for a rifle scope. The TARAC Charlie is the optical equivalent to a 20 MOA rail, but it can be quickly added and removed from the end of the optic. When attached, it creates a “second zero” from 10 to 120 MILs above the scope’s current setting. 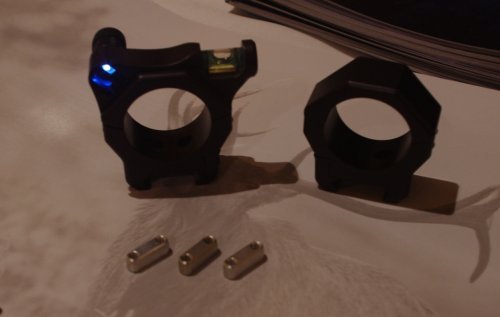 iota Outdoors is showing off their fully featured Triad ZL rings, which come in both 30mm and 34mm with low, medium and high variations. They have a built in anti-cant level and illumination for turret markings. The rings also ship with a set of three different sizes of removable key inserts, which allow for the most precise fit a a Picatinny rail. 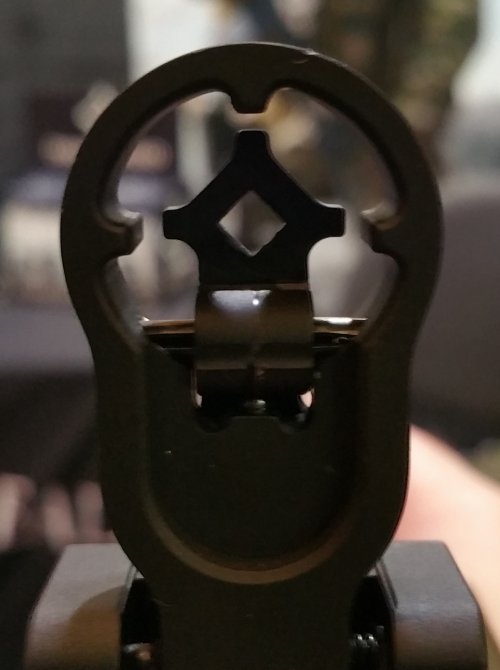 Diamondhead is showing off the prototype for their new Hole Shot flip-up sight design coming out later this year. It has the two apertures that you would expect to find on an AR15 rear sight. However, they fold out out the way so that the rear housing can be used by itself for fast target acquisition. 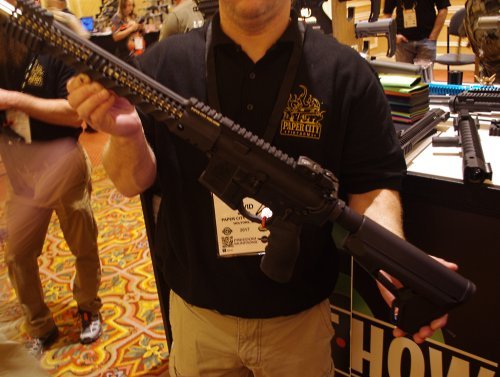 Paper City Firearms has a really interesting new AR15 handguard design, the DV8. One side has spaced finger groves, while the other is smooth, which eliminates the need for some of the add-on accessories designed to give shooters a better grip. There are both left and right handed versions available in various lengths. 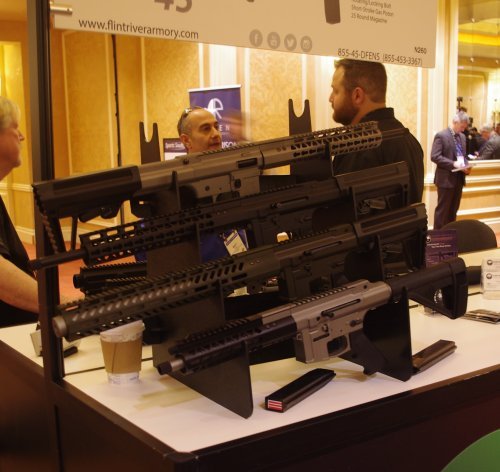 Flint River Armory is proudly showing off their new, 100% made in the USA, CSA45 platform. Instead of doing a 45ACP AR conversion, they have put together a new system which retains the “AR feel”. There are four different models which all use their proprietary 25 round magazine. The integrally suppressed variant, which is coming out later this year, is the one rifle of the day that I most wish could come home with me. 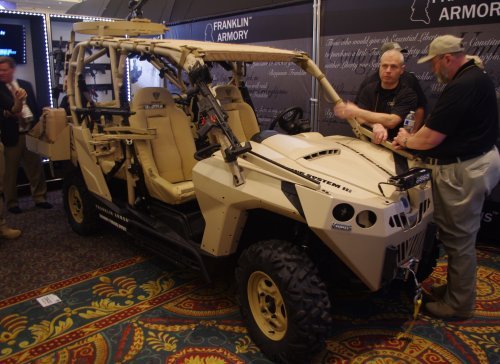 Finally for today, RP Advanced Mobile Systems brought their RP Strike-C4 BFS Edition to show off. It apparently started life as a Can-Am Commander before being optioned out with, well, everything. It has the full array of tactical options, from a top ring gun mount to a passenger side swing mount and more places to strap on rifles than I could keep up with. This was attracting enough attention at one point to all but stop traffic in the isles and is a good spot to round off our most interesting products of the day.