Get Organized With A Paracord Rope Kit 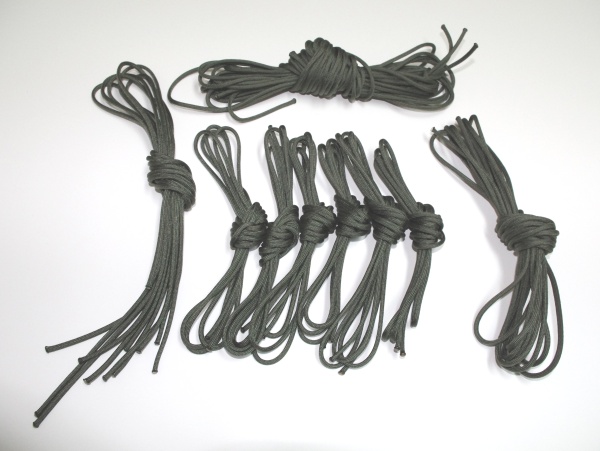 Paracord, also known as 550 cord, has earned a place alongside duct tape as a multipurpose item for repairs and more. This slim, green rope was originally used by the military to attach people to parachutes, so it is surprisingly strong and lightweight. Its design is basically a scaled-down version of the kermantle rope used by rock climbing enthusiasts. Nylon Paracord

The problem is that I can’t recall the last time that I needed a thousand or even a one hundred foot long piece of rope to tie something down. So, what’s a guy to do? Of course, you pull out your trusty knife and cut a piece off to the exact length you need and then fuse the ends a bit with a lighter, so it won’t unravel. But, not wanting to be wasteful, you save that piece to be used again. Over time, you end up with rope pieces in a random assemblage of sizes. Since it would be a huge pain to try to dig around and find a piece that is about the right size for the job, you just pull out your trusty knife and cut another piece off, to later be added to the pile of misfit ropes.

A better option is to put together a paracord rope kit. This is just simply a matter of getting organized and having a set of pieces of known length and number. A good starting point would be to dig through the box of discarded rope pieces and see if you can make a set from the most common sizes. I ended up with about a half a dozen three-foot lengths, the same number of seven-ish foot lengths, three ten foot pieces, and one twenty foot piece. This should be enough to quickly tie down a tarp, hang a clothesline, run a ridgeline for an emergency shelter, hang a bear bag and make a sling or pet leash. The ends of all these pieces are already fused, so they won’t unravel and the sections are stored in nothing fancier than a Ziploc freezer bag. A little more organization now means a little less stress when it counts.