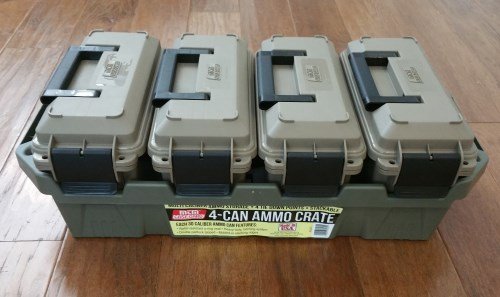 As part of a larger “get organized” mission, I’ve been working on sorting through and optimizing some supplies, including ammunition. Ammo tends to be rather awkward to store or transport, due to its weight, need to stay totally dry and keep sorted by caliber. The MTM 4-Can Ammo Crate is the best way that I’ve found so far to solve these issues. 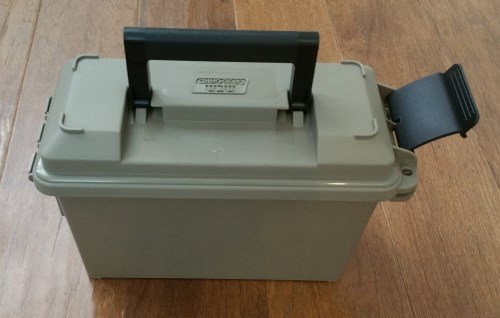 MTM’s AC4C Ammo Crate is a set of four 30 caliber ammo cans with a storage tray. The cans are heavy plastic and come with a well-designed carry handle, which will lie flat with the top of the can when folded down. This, along with the raised ridges on the corners of the can lids, allows the Ammo Crates to easily stay in place when stacked on top of each other. 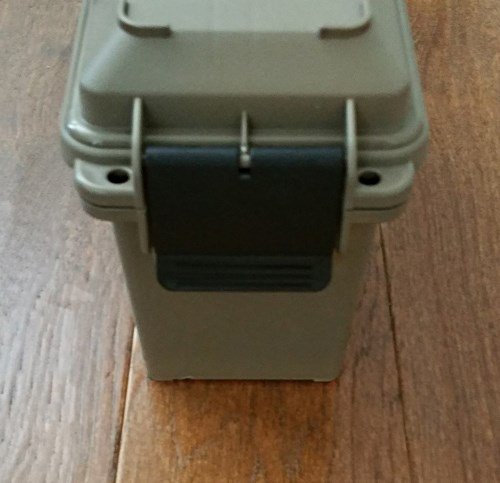 The locking latch holds the lid securely shut and is largely protected from accidental opening from the side by the raised flanges molded into the sides of the each can. There are also padlock holes on each side of the latch for securing the contents of the can. These are a nice addition to keep out curious children or pilfering hands. 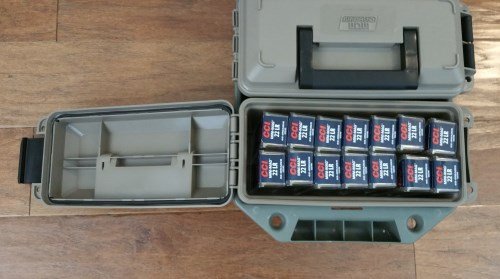 When locked shut, the lid seals with an o-ring. The hinge also allows it to open all the way, similar to the military style cans. However, unlike the metal cans, the inside of the lid is reinforced but still has some space inside when closed. This allows a little storage room above the top lip of the can for taller items, like 100 round bricks of 22LR.

What really makes the MTM 4-Can Ammo Crate work is the tray that houses the cans. This tray has large, rounded carry handles built into each end. There are four lash holes, one build into the end of each handle, and plenty of drain holes in the tray’s floor. The inside of the tray has slots for each can so they are held in place, even when one is open or removed. When loaded with ammo, the set is still heavy, but manageable. This makes it easy to move ammo easily and keep it organized, whether going out to shoot or needing to load the truck up in a hurry. Since the loaded trays stack well, it is easy to keep one can empty for collecting brass or storing some of the bulky stuff that does not fit into your range bag. Amazon currently has the MTM 4-Can Ammo Crate for about thirty dollars a set. You can also pick up caliber specific vinyl decals as an option, for something dressier than masking tape labels. My plan going forward is to use these as the basis of my ammunition organization system.