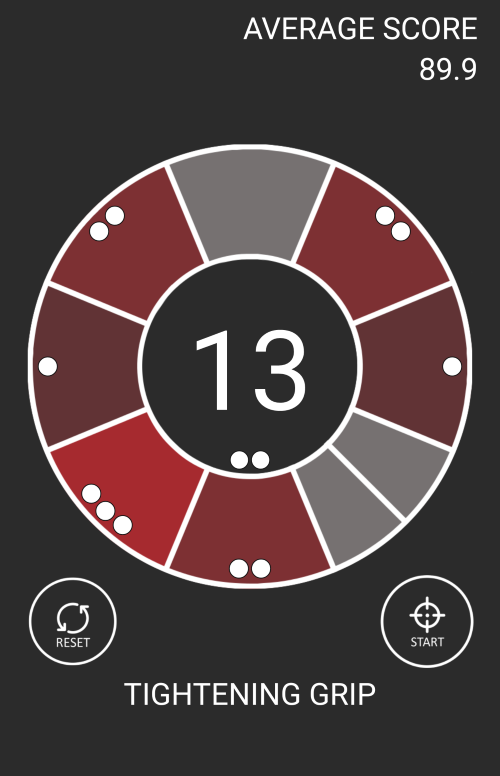 The only secret that I’ve ever found to shooting over the years has been consistent practice of the fundamentals. Just like most folks, though, I don’t have a range in my backyard, so not every day involves trigger time. This makes it important to maximize the usefulness of all the range time when it does happen, which is the idea behind the MantisX firearms training aide. 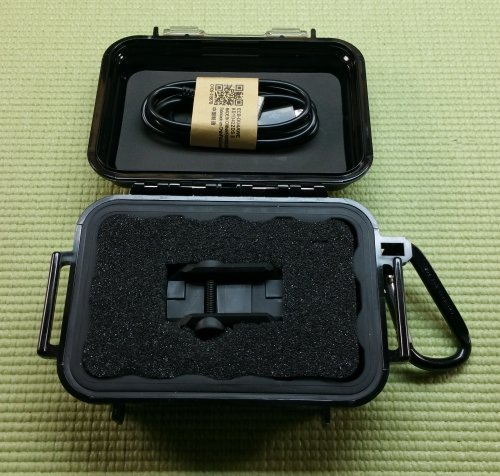 The MantisX hardware ships in an actual Pelican case, which also solves the problem of how to keep the unit safe in a range bag. The hardware portion is nested in foam with a USB charging cable on top. The software part of the system was easy to download off of the Google Play Store for my Android smartphone. It was the first free app on the list when searching for “MantisX”. There is also an Apple version for iPhone users. 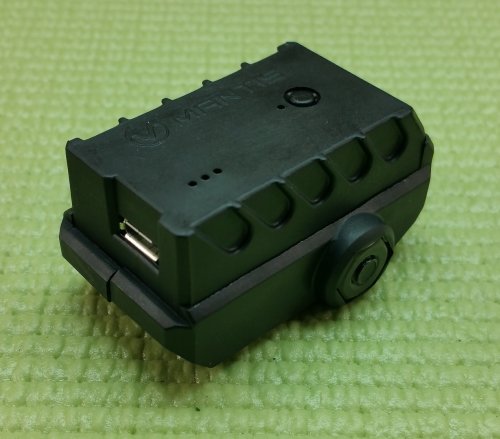 The one button on the MantisX hardware turns the unit on when pressed and off when held down for about three seconds. Next to the power button is a small green LED, which will flash to let you know that the unit is powered on. This LED will stop blinking and turn solid green when the hardware is synced up with the software on your smartphone via Bluetooth. One point worth noting, which gave us a bit of trouble the first time through, is that you do not need to pair this device with your smartphone and type in a PIN. Just turn the hardware on, make sure that Bluetooth is up and running on your phone, fire up the MantisX app and follow the directions on the screen. The USB port on the back of the unit is for recharging the built-in battery. The three LEDs about this port are for indicating battery life. 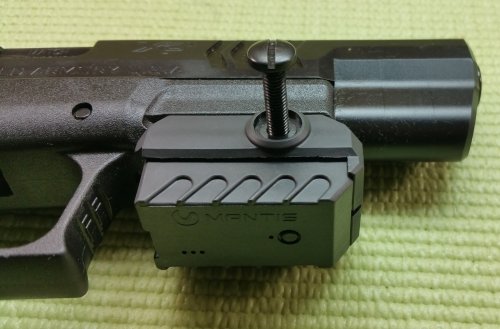 The MantisX mounts to a Picatinny rail with a single screw. Attachment is just a simple matter of backing the screw out, sliding the unit onto the weapon, and then tightening the screw just enough to keep everything in place. Orientation is not a problem, as the software has options for forward or reverse mounting, as well as left or right-handed shooters. 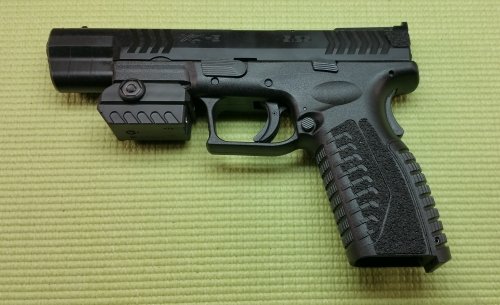 With the MantisX mounted to a pistol, I was not able to tell any measurable difference in handling, which is not too surprising for an accessory which only weighs about one ounce. What I was able to do, though, was get feedback on shots that didn’t end up where they should have. Sometimes, when there is a flier, you know right away that the trigger was jerked on that last one. However, I’ve also taken shots where I really wasn’t sure what happened for the hole on the paper to somehow end up way over there near the edge. This is where the MantisX steps in as your digital shooting coach who can quietly point out what fundamental might have slipped on that last round. 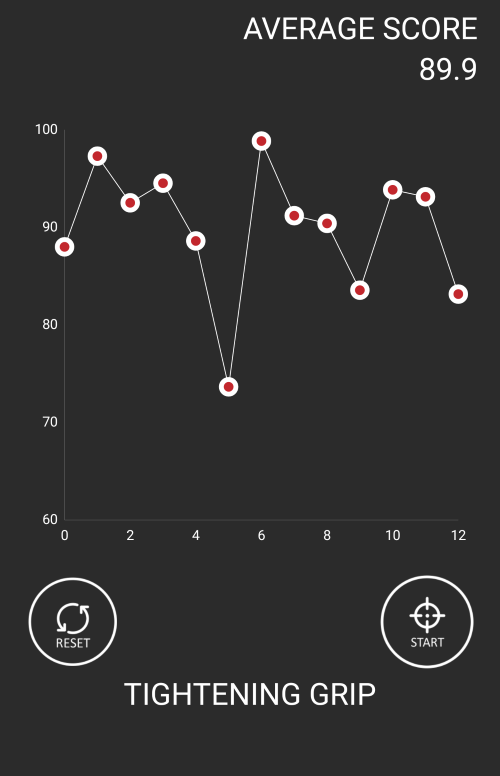 The MantisX will also keep track of groups of shots while scoring each shot independently. A 100 would be a shot with absolutely perfect form. One thing to keep in mind is that MantisX is not looking at where the bullet ends up. Rather, it’s sensors are measuring the three-dimensional movement of the gun as the trigger is pulled. It is studying how someone is shooting, not the point of aim on the last shot. But, as long as the shooter lives up to the assumption of actually pointing the pistol at the paper before pulling the trigger, the system works surprisingly well. 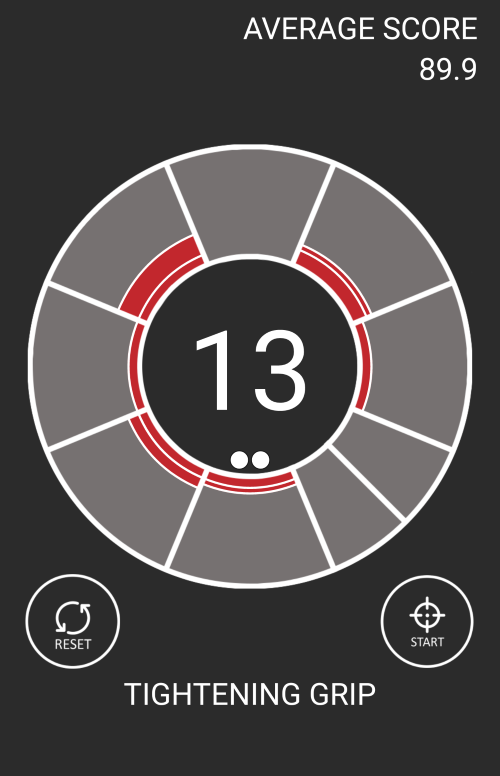 When first using the MantisX, I found the biggest benefit from setting everything up and just shooting ten to fifteen rounds as if it were not running. Then, taking a look at the app on my phone for feedback and looking for trends. In the “Learn” mode, clicking on the different sections of the circle provides more detail about the shooter’s feedback. For example, “tightening grip” has a whole paragraph about how, on the last shot, I probably tightened my hold on the pistol while pulling the trigger. It also gives additional feedback on how to fix this issue on the next shot. These functions also work in dryfire mode, which is the feature that lets the MantisX pay for itself. With this, you can put the live ammo away, tape a target up the to wall, and practice with “the coach” for free in the basement or garage. We did find that that, even without the “bang” of real ammo, the unit was about to catch about 95% of the trigger pulls. The trade-off is racking the slide in between shots on a regular Glock, Springfield, etc. With the MantisX though, there is no longer a reason to not get a few minutes of practice every day to continually reinforce good shooting habits, as if you did have a range in the backyard. 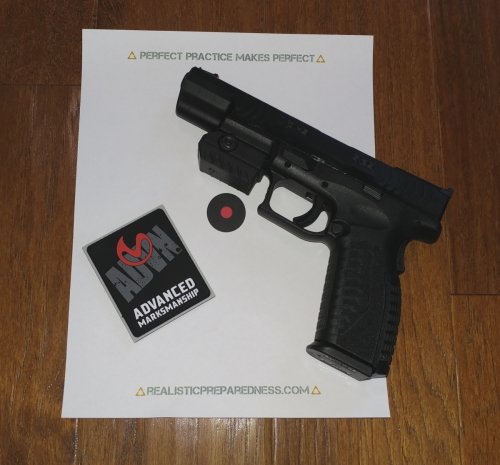 MantisX has been hard at work upgrading both their hardware and software. The Mantis X3 has the basic dry-fire and live-fire feature set. The Mantis X10 Elite is the newest hardware that adds additional features, such as the ability to work with shotguns, measure a weapon’s recoil, as well as help with improving your holster draw. Their team has also added two new training programs into the phone app, one for Basic Marksmanship, and another for Advanced Marksmanship. These programs set challenges to help you improve while supplying feedback and guidance on your performance. This has really helped to keep dryfire practice meaningful during the COVID lockdown. Here is the link to the PDF of the Mantisx Dry-Fire Practice Target that we made for home training. If you want more of a challenge, check out the Mantisx Dry-Fire Scatter Target which adds a level of decision making to your draw/fire drills.