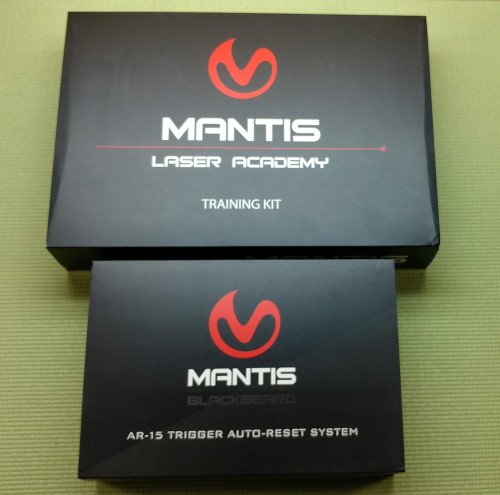 With the rising cost and limited availability of ammo, getting in some range time has become more difficult over the last year. One fun solution to this problem is laser based training using the Mantis Laser Academy Training System and the Mantis Blackbeard AR-15 Trigger Auto Reset System. We had a few weeks to get these into the hands of about a half dozen different shooters of both genders and various skill levels in order to get multiple points of view. 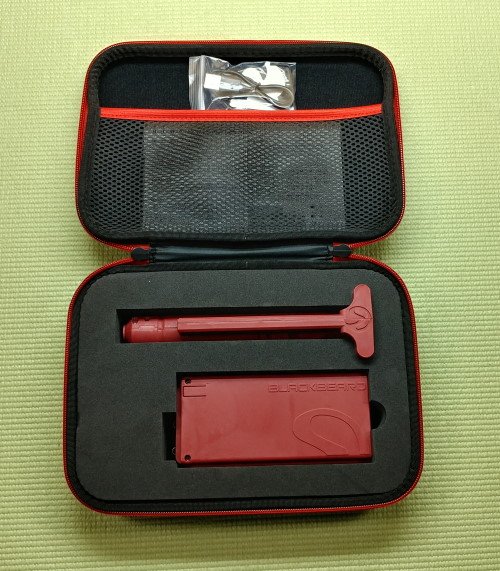 Both the Mantis Laser Academy Portable kit and the Blackbeard AR system come with a nice storage case. There is a dense foam block inside with cutouts and a storage pocket for all the included parts of each kit. The Blackbeard is made of up the laser “bolt assembly” and the “magazine” rechargeable battery. The USB charging cable is included in the top mesh pocket of the case. The whole unit will easily fit in a range bag or a nightstand drawer. 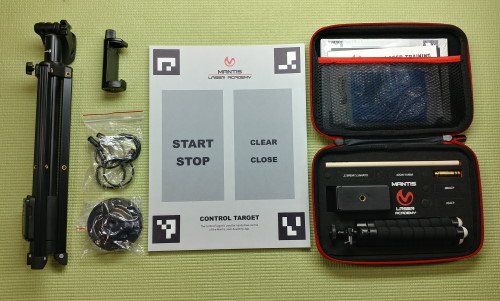 The Standard Laser Academy kit has all the items in the Portable, but also includes a larger tripod, larger targets and a set of table top target holders. We found the larger tripod to be perfect for setting up to shoot on the back of a bedroom door and definitely preferred the larger 8.5×11 inch target size to the smaller 5×7 portable targets, although both worked just fine. 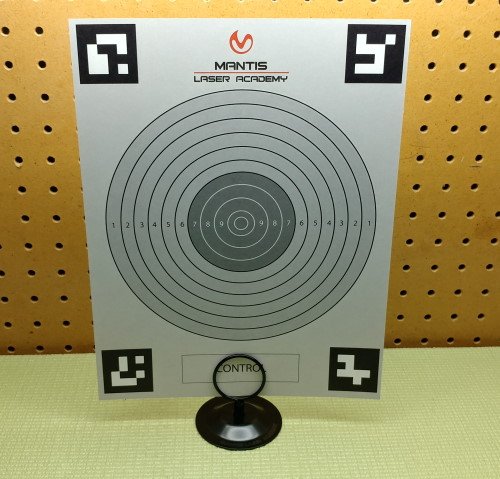 The target holders come as five sets of two pieces that are packaged in separate plastic zipper bags. They screw together and provide a way to transform your workbench into an impromptu shooting range. They could also turn the kitchen table into a shooting gallery, if some people just happen to be out of the house Christmas shopping. We worked out a mini-game where someone would hide targets around the house for another person to clear with a laser training cartridge pistol or Blackbeard-ed AR. It adds an interesting level of fun stress when looking around a corner and searching for “potential paper threats”.

The Mantis Laser Academy set includes IPSC, IDPA, FBI Qualification, B-27, BT-5S, Head Shot and a Hostage target that are fun to mix and match for house clearing. There are also Bullseye, Dartboard, numbered Dot and numbered shape targets in the stack. One of the things that was impressive on Mantis’ part was that replacement smart targets are available without having to order a whole new kit, or can be printed individually for free for folks that keep card stock paper on hand. 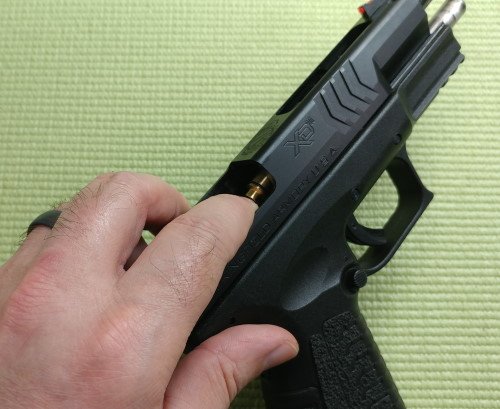 Installing the Academy’s Laser Training Cartridge in a pistol is dead simple. First drop the mag and clear the weapon. Make sure that the “primer button” on the laser is facing towards the rear. Then, manually insert the laser cartridge into the chamber and push it all the way into place.  Expect to give the round a bit of a push, as it is a snug fit. It helps to put just a touch of oil on the o-rings. Now, close the slide and you are good to go. You will need to work the slide in between shots to reset the trigger on single action pistols, such as the Glock. Removing the laser round is just a matter of locking the slide to the rear and using the included wooded dowel rod down the barrel to push the cartridge back out. 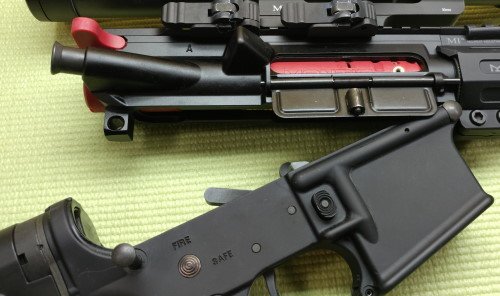 Installing the Mantis Blackbeard is similar to starting to field strip an AR15. First, drop the magazine and clear the rifle. Then, push the rear takedown pin to the side and remove the bolt carrier and charging handle. The Blackbeard laser module slides in to replace both of these parts. Then, close the receiver and push the rear takedown pin back into place. On a few of the ARs we tested, this was a snug fit, so a little downwards force on the rear of the upper was needed to help get the takedown pin started.

Next, insert the battery all the way into the rifle’s magazine well. This is no harder that loading an AR and the Blackbeard certainly feels sturdy. However, we did press the magazine release button to make fully seating the battery easier. The whole installation process takes about one minute. Also, the battery life on the Blackbeard is crazy. We have not been counting trigger pulls, but after a few weeks and multiple shooters playing with the Blackbeard, we are still on the first full charge. What makes this such a blast to shoot is that it will automatically reset the trigger as fast as you can pull and mark your hits with a green, red or IR laser, depending on which model you buy. A couple of us took turns trying to outrun the trigger reset and were not able to do so. It worked well with both mil-spec and cartridge style target triggers. 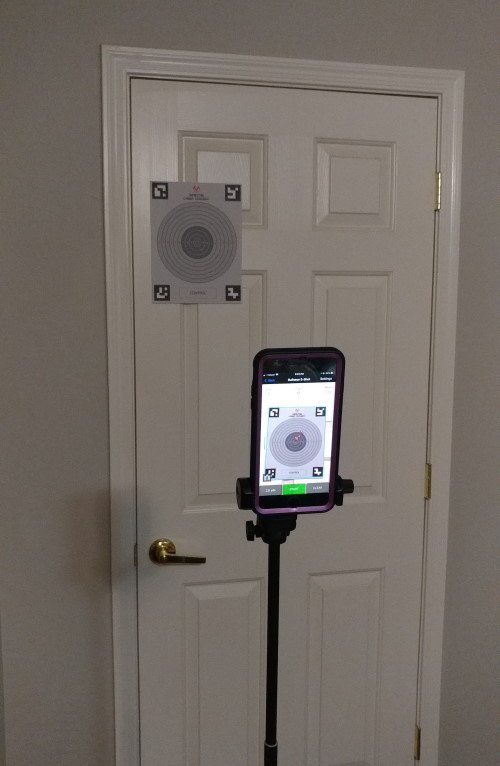 What really makes the Mantis Laser Academy interesting is the app with the same name. It uses your phone’s camera to watch the smart targets and score the hits. The app can work with a single target or an array, if you have the wall space. Sound effects are added to the shooting experience, from a shot timer to the pistol’s ghostly brass tinkling on the concrete. We were able to test the app on a few different Apple and Android phones. The only bump in the road was a four or five year old Android device that just did not quite want to play along, but modern devices worked correctly on the first attempt. It does take a minute or two to get the phone lined up with the targets on the wall and everything adjusted, but the app walks you through the process and highlights the next steps.

There are currently fourteen different shooting drills as well as a pistol marksmanship course that walks you through a series of challenges with a half dozen different targets. If Mantis handles the Academy the same way they have the MantisX software over the years, I would not be surprised to see this list grow longer. About half of the current activities are marked as requiring a “Pro License”. This is not really an issue though, as the needed unlock code is printed on a card tucked in the top mesh pocket of the carrying case. The app will also track new drills with light blue dots on the left side of the screen. 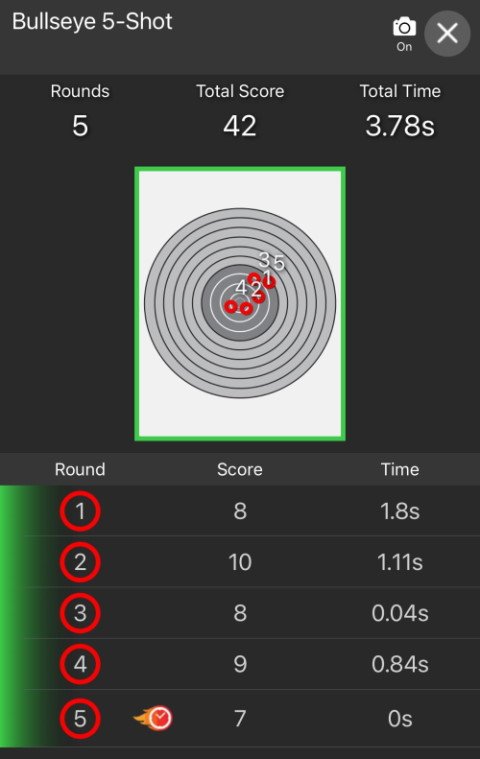 Ultimately, more practice, especially with feedback such as scoring, leads to better shooting, even for experienced marksmen. I can pick one element of the fundamentals, such as grip or trigger pull and focus on it for twenty minutes of practice in the evening without having to pack a range bag. The only aspect that laser firearms training cannot directly help with is recoil control. However, there are some potential benefits to taking this out of the equation, especially for young or new shooters. We gave a Blackbeard equipped AR to a woman who was new to the platform. After briefly explaining how the system worked, she commented feeling much more comfortable with the rifle since she could take the time to get a feel for it and “fire” it safely. This could be an obvious first step to teach safe handling for either rifles or pistols and have some fun building foundational skills before moving to live fire training at the range. I have thought about setting up two targets in the kitchen and using the Academy’s Single Shot Duel drill with the Mrs. to decide who has cleanup duty after dinner. But, I have seen her shoot enough to know that after a week or two, it would be hard to explain my dishpan hands to too many friends. Both systems are available directly from Mantis or you can pick up the Laser Academy from Amazon or the Blackbeard from Brownells.