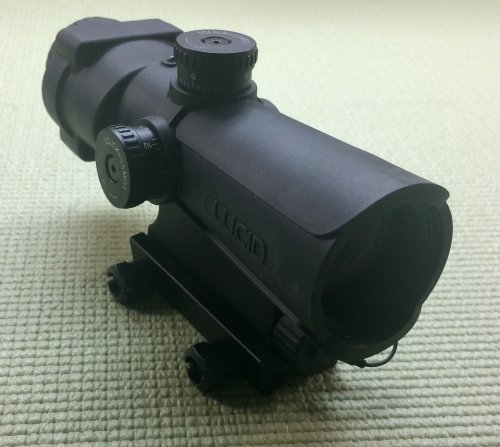 The search for the perfect rifle scope is akin to the search for the lost city of El Dorado. It is easy to get obsessed and spend significant time and treasure, thinking that perfection is just around the next bend. However, all optics are a matter of balancing trade-offs and features for a given price point. One scope that offers a surprising amount of features for the money in a body that’s build like a tank is the Lucid P7.

For those not familiar with Lucid, they are a smaller optics company based out of Riverton, Wyoming. They’ve been around since 2009 and currently have about a half dozen different models in their lineup. Like many companies these days, product design takes place here in the US and manufacturing is done overseas to stay competitive. The Lucid P7 that we’ve been shooting with for the last month came with a “made in China” sticker on the bottom. 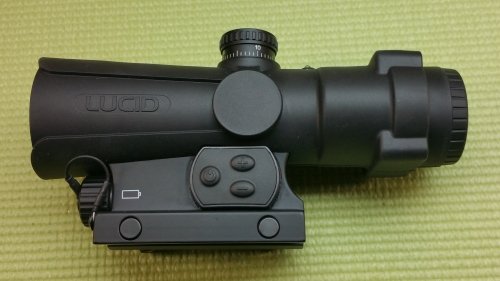 The P7 is Lucid’s flagship combat optic. It is a fixed four power magnification scope with a built in picatinny rail mount and partially illuminated reticle. Only the center circle and dot of the etched reticle glow red when turned on. The illumination controls are on the left side of the riser mount, just below the body and are a simple to use, three button affair. Pressing the front button is “on, automatic mode”, a second press is “on, manual mode” while holding down for a few seconds is “off”. The two rear buttons increase or decrease the light intensity in manual mode. We were able to distinguish ten different brightness levels when tested after sunset. However, just behind the top scope knob is the small photo sensor that does a surprisingly good job of quickly adjusting the illumination level in automatic mode. 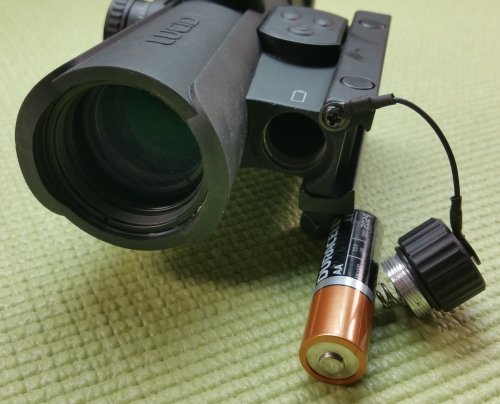 Lucid designed the P7 to run off of a single AA battery, which should be something that everyone is already keeping around for emergencies.  The battery compartment cap is leashed to the scope body, so it won’t go wandering off in the dark. We tested our sample with Duracell, Eneloop and store brand batteries without any problems. Since the electronics just sip juice when turned on, a single battery should last over 2500 hours. The illumination automatically turns off after two hours, as well. Lucid will not warranty any damage caused by batteries dying an ugly death inside the P7, so it might be a good idea to use one of the less leak prone lithium cells when leaving a AA in the scope for extended periods. 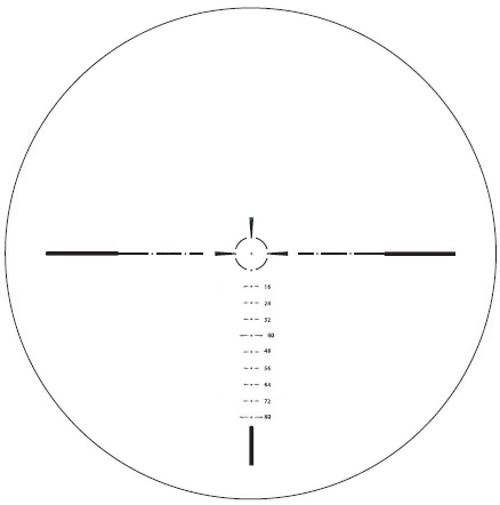 The P7 reticle is one of the better laid out designs that I’ve had the opportunity to use. It is simple enough to not be distracting or get in the way of actual shooting. But, it has enough detail to give the user some interesting options. First off, it is based on the MOA system and not specifically calibrated to M855, MK316 or any other load. This is an advantage, since one P7 can work with any realistic combination of caliber and barrel length. There is a 1/4 MOA center dot for precise aiming, in the middle of a 4 MOA circle, when faster shots are needed. The horizontal crosshair is made out of spaced bars and dots for estimating windage. The vertical bar is made up of labelled segments and dots spaced every 8 MOA for elevation holds. With a bit of range time, a shooter can easily work up a chart for a specific load and gun combination at various distances. Using software, like STRELOK for smart phones, can help with ballistics. 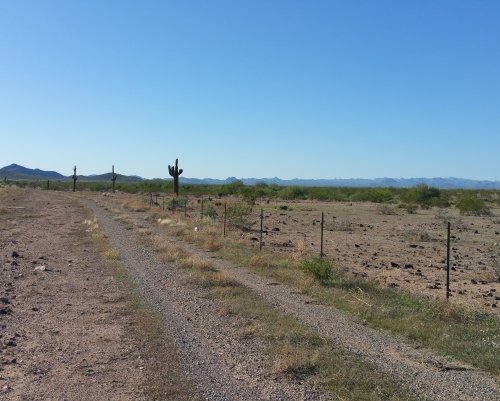 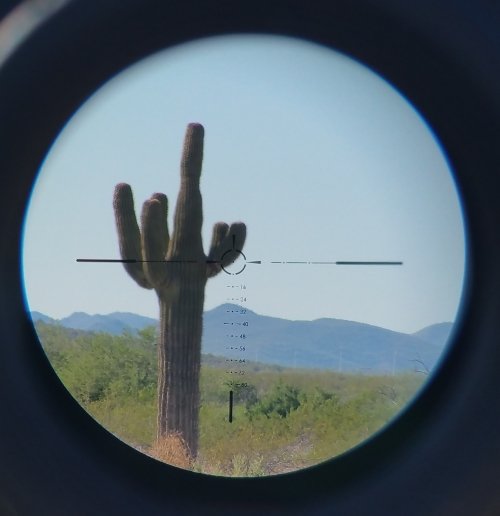 Another thing that Lucid got right with the P7 is the quality of the glass. In testing, it is clear enough to let me pick out individual plants on a distant hillside. That is true not just in the center, but also out to the edge of the view. When compared side by side with a Nikon optic, known for having good glass, I am not able to discern a measurable difference in the image quality between the two. Since the P7 is set at four power magnification and provides a field of view at of twenty-five feet at one hundred yards. We’ve provided a pair of scope/no scope views for comparison purposes, to see what that level actually looks like when viewing relatively close and distant objects. 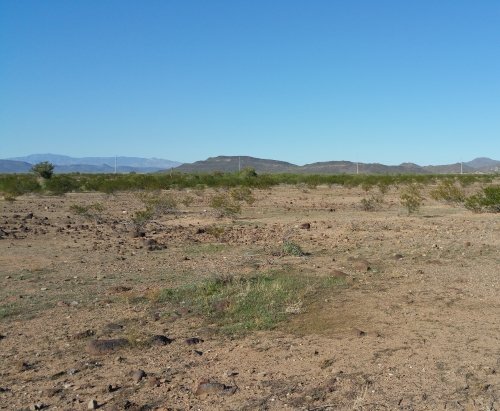 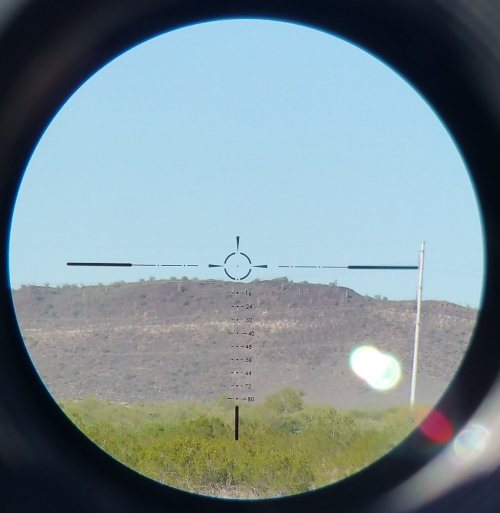 The objective lens of the P7 is 30mm and comes threaded for a killflash filter. This lens size does seem to limit the light gathering ability of the scope after dusk, when compared to larger optics. Adjusting the P7 is easy, due to the large target turrets. Each click is 0.5 MOA and it does take a fair amount of force to turn the knobs. The movement is smooth with clear clicks that can be both heard and felt.  After some time at the range, we found the adjustments to be repeatable with a “ten clicks over, ten clicks under” test. 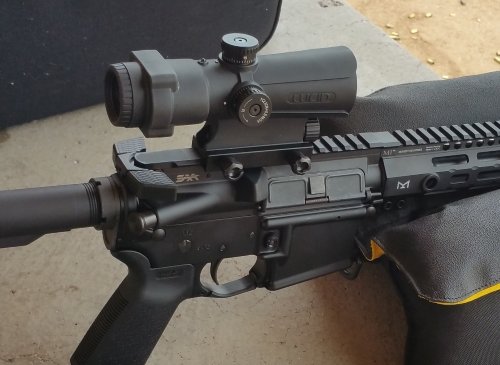 The biggest drawback to the P7 might be the weight of the unit, at 1 lb. 4 oz. with battery. The difference between having this scope on a rifle or not is noticeable when carrying and shooting out in the desert. However, this could just be the cost of increased durability, as similar optics are close to the same weight. The obvious comparison to make is between the Lucid P7 and the Trijicon ACOG 4×32 LED, since the two optics look like they could be cousins. However, this is really where Lucid’s scope finds its niche, since one ACOG costs roughly the same as three P7s. Lucid’s design is a tactical scope for all the folks who are not ever going to spend a thousand dollars or more on optics for their rifles. All things considered, the Lucid P7

provides a lot of bang for the buck and is worth taking a look through for those folks who are in the market for a fixed power, combat style optic.