How To Use Pistol Mounted Tactical Flashlights – Getting Started 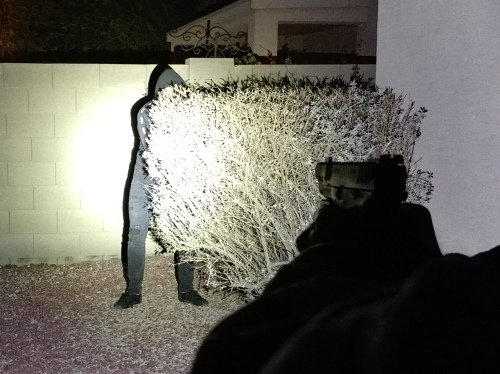 One of the basic rules of firearms safety is to identify your target and what lies beyond it. This gets more challenging after dark. Using tactical flashlights mounted to a firearm is one of the simplest ways to improve the nighttime target identification of possible threats and potentially avoid problems.

Modern weapon lights have a high enough output to not only light up but temporarily disorient a potential threat. One of the main reasons that these are becoming so popular is their ability to help give you control of a low-light situation and avoid accidents. Who made that noise in the backyard? What is in their hands? Is it someone armed trying to break into our house or the neighbor’s kid just sneaking home after curfew?

We like the SlideRail XWL Tactical Weaponlight because it worked with every railed pistol that we could get our hands on for testing. It didn’t matter if it was a Springfield Armory XD series, an actual Glock, or some polymer clone, the SlideRail could be adjusted to work. The large thumbscrew tightens the clamp on the rails while the smaller hex head is the fine adjustment for dialing in the location of the central indexing tab.

Many tactical flashlights, this one included, run off of a pair of 3V CR123A Lithium batteries, as this is the tried and true way of getting enough juice to produce a really bright light for a reasonable amount of time. The batteries can also have up to a ten-year shelf life and are less temperature-sensitive than other common options, making them a good stocking-up choice for emergency situations. The main drawback to CR123As is that they are not the cheapest option. However, most rechargeable weapon lights only trade-off one set of problems for another as just swapping batteries is a faster fix than waiting for an onboard battery to recharge.

The switch on the back of the light is a double-tail toggle style that is designed to extend back past the front of the trigger guard, towards the shooter and their fingers. This is the common switch design on pistol lights, with a few variations. The switch is ambidextrous and pushing the switch bar on the right side up provides temporary lighting as long as it is held. Pushing the same bar down will keep the light on continuously until the switch is clicked back off. This gives you the option to quickly light up areas as needed, without having a bright beam pointing to your exact location as you move around. It does take some practice to get used to this and figure out what works best for your hands, so schedule a little practice time every week to smooth things out.

All the pistol-mounted tactical flashlights will have some mix of spotlight and floodlight in their output. My personal preference is to have a bright central spot, but still have enough flood mixed in to identify other potential nearby threats. As we can see with the XWL Tactical light, at twenty-five paces down a dark trail at night, there is enough of a central spot to clearly identify details such as the location of a potential threat’s hands, their clothing, and details of their behavior. They are close enough to quickly become a threat with a sharp object, so being able to pick out these details is key to staying safe.

At fifty paces, the eight hundred lumens is still plenty of light to clearly identify the potential threat and their movements. This is also enough light to have an impact on their vision and help prevent the threat from knowing details about your situation. How many friends are in your group or are you alone? Are any or all of you armed? The weaker your position, the bigger this advantage becomes.

At seventy-five paces the flood characteristics of the light start to become more obvious. I want to be able to identify if that is just a lone person up ahead or if there are potentially other dangers in the nearby trees. Also, is the person acting agitated and nervous or just out for a stroll? Since more distance gives me more options for avoiding confrontation, the sooner I can identify a potential problem, the better. Look for anything out of place and do not ignore that “something just isn’t right” feeling.

At one hundred paces we can still identify the target but are losing the ability to resolve important details due to distance rather than lack of light. However, we can still tell if there is a mob of folks and we need to start heading in a different direction or if there is just one person headed right our way, but with intention. Lighting someone up also lets them know that they have been identified as a potential threat and no longer have the element of surprise.

The biggest argument against weapon-mounted tactical flashlights is that if you are pointing your light at something, then you are also pointing a gun right at it. However, if you are in a situation where you really do end up needing a firearm, this is a huge advantage. Also, I am not aware of any law, yet, that limits you to only carrying one flashlight at a time. Another pocket-sized light is still a good companion for tactical options and finding items in your pack. Cost-wise, the LA Police Gear SlideRail­­ XWL Tactical Light comes in at right around sixty-five bucks, which is a lot of light for the money. It is close enough in dimensions to a Streamlight TLR-1 to work with compatible holsters. If you are looking for a solid, first tactical flashlight to mount to your pistol so that you can start working on low-light training, then this one is worth a look. After all, it is dark outside about half of the time every single day.