Even with an armload of aftermarket options out there, the standard USGI trigger parts are still found in most factory guns.  This is largely due to their low price point and a track record of reliability. However, these factory parts can produce a gritty, heavy trigger pull and still be considered in spec. Right To Bear Arms recently released their Enhanced Nickel Teflon Trigger Assembly, which is a very budget friendly revision to the standard AR trigger. 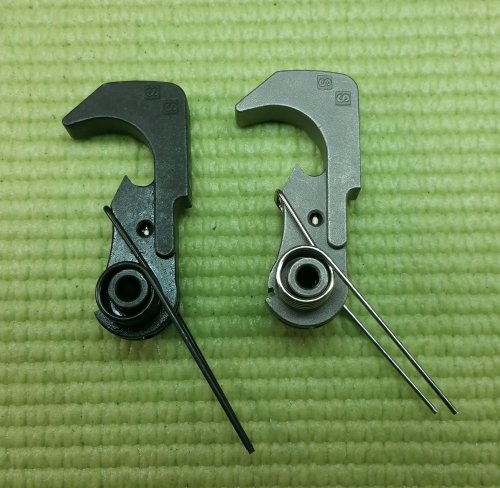 RTBA starts with the same US made, semi-auto parts that go into many of the better known AR brands. What they add to the Enhanced Nickel Teflon Trigger Assembly is additional polishing, plating and quality control. So, to evaluate the effectiveness of these additional manufacturing steps, we found a standard AR15 trigger group with nearly identical markings as our point of comparison. Both groups were installed in the same rifle to eliminate other factors during testing. 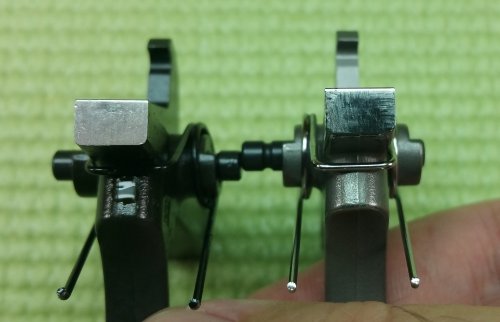 For those interested in the details, the Enhanced Nickel Teflon Trigger Assembly is polished before heat treating. This is an advantage, since the case hardening process used on triggers produces a thin carburized layer on the outer surface, so less material removed is better. Then, these parts are plated with Nickel Teflon rather than phosphate treated. This alternative plating, originally used in industry for things such as injection molds, creates a grey surface color and a slick, almost greasy feeling. Since the Teflon is mixed in with the nickel, the slick finish will not rub off like paint, and adds a barrier against corrosion. As for quality control, each trigger part is inspected by RTBA three different times. This includes a final step of mounting each group in a jig and hand testing functionality before shipping. A pull gauge is also used to verify that the trigger pull is in the 5 to 5.5 pound range, which was the case for the parts we tested.

Installing the Enhanced Nickel Teflon Trigger Assembly is the same as installing a standard USGI trigger group. For those new to the process, the correct location and orientation is shown for the trigger assembly (above) and hammer (below) after installation. There are a few tricks that make installing the trigger group easier. Cutting a spare trigger pin the width of the hole through the hammer allows assembly of the trigger parts outside of the receiver. Then, it is just a matter of dropping the assembled set into place and using a full length trigger pin to push out the short one. If there isn’t a spare pin handy, then a punch can act as a “third hand” to help hold the parts in place during installation of the trigger and disconnector. 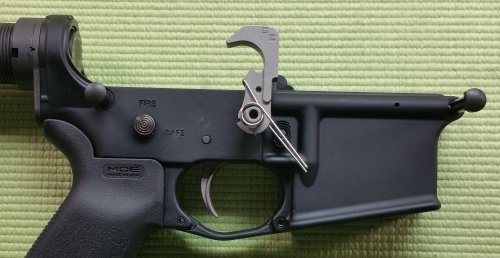 When installing the hammer, make sure that the spring is properly attached with the curved end and legs making a diagonal line across the bottom half of the part. It is common for the spring’s legs to not want to go into the receiver or try to end up in the wrong spot. Tilting the hammer forward so the legs are sitting on top of the trigger pin and then rotating the part down until it lines up with the holes in the receiver is often the easiest way. Also, have a pin ready to push through the receiver and hold the hammer in place, as it can take a bit of thumb work to get the spring compressed. 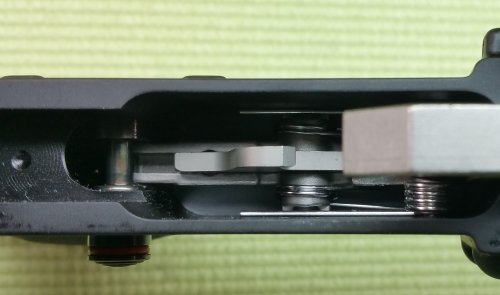 If everything is installed correctly, then the Enhanced Nickel Teflon Trigger Assembly should look as shown. Do note how the legs from the hammer spring go over the top of the trigger pin to help hold it in place. Also, when putting all of these parts together, we used just a squeeze of Krytox grease on each of the pins. We’ve reviewed this lubricant in the past and still think it is the best thing going for situations where future maintenance could be difficult or impossible. 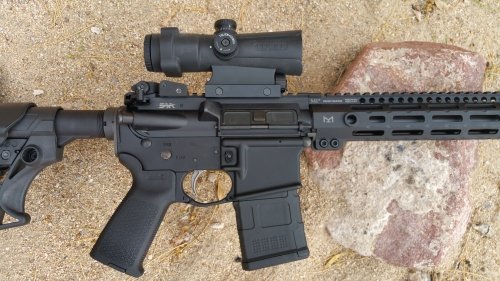 After installation and testing, the extra work that Right To Bear Arms puts into polishing, plating and quality control make an impressive difference when compared to a standard AR trigger group. The Enhanced Nickel Teflon Trigger Assembly is night and day better than the standard parts. The entire pull stroke is impressively smooth, with a weight that is noticeably lighter than the comparison group. The break is as clean as I’ve felt on other assemblies after a trigger job, with little creep. Take-up and over-travel are similar to the standard milspec set. We had zero reliability issues, which is not surprising for parts based on the USGI assembly. While it is certainly possible to spend more money and get a top tier match grade setup, they don’t exist at this price point.  For a go-to emergency rifle, the Enhanced Nickel Teflon Trigger Assembly  is a solid option for anyone who does not want to spend $100 or more on a trigger.