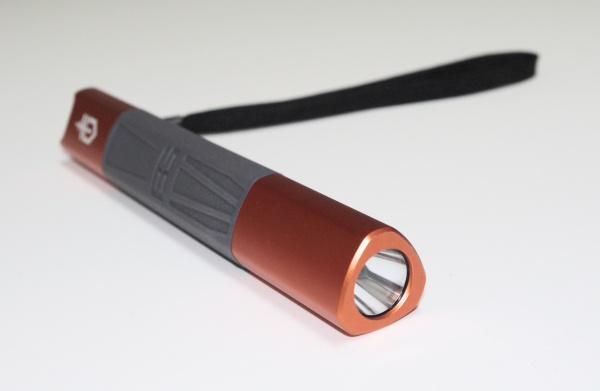 Flashlights have evolved markedly in recent years. As better LED technology has been introduced, flashlights have improved to give us levels or brightness and battery life that were unimaginable ten years ago. Quality modern flashlights are more resistant to weather, have bulbs that won’t burn out, batteries that last much longer than before, and can even offer multiple brightness settings. Gerber’s Bear Grylls Intense Torch is a good example of a modern flashlight that should replace the old lights with burned out bulbs and dead batteries that are living in many kitchen drawers today. 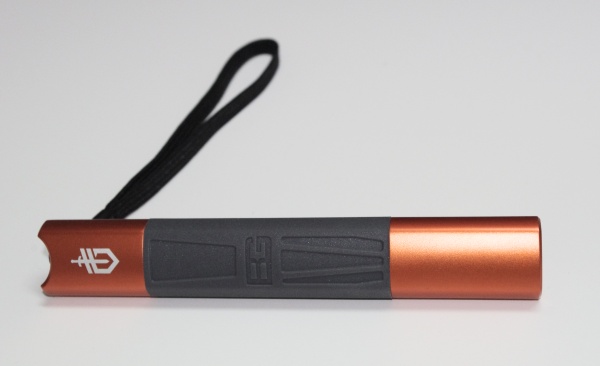 Bear Grylls has become both an expert in survival and marketing with over thirty branded products that carry his name. It would be hard to not respect the work that he does for the Boy Scouts and at least one of his signature items shows that he doesn’t take himself too seriously. This new Bear Grylls flashlight model is in many ways an upgrade from the Survival Torch

. The older model trades off battery life and light output for a storage compartment in the rear of the light body, for keeping matches and such. The Bear Grylls Intense Torch

skips the secret compartment to instead be a much brighter light with more features. It is a good, solid design that has a nice set of options.

The Intense Torch runs on two AA batteries. One advantage to keeping a AA light on hand is that the spare batteries can be used to power a huge variety of other electronic devices, such as emergency radios. With both AA and AAA powered devices, you can pull the batteries out of things such as kids toys and the TV remote, in a pinch. This light has an O-ring seal at the end of the threads and it is rated as IPX7 waterproof by the ANSI/NEMA FL-1 standard. This relatively new set of standards came about when over a dozen flashlight manufacturers got together and agreed to test their lights using the same procedures in their labs for things like waterproofness, light output, battery life and beam distance. The IPX7 rating means that the Intense Torch should be safe from rain, snow, hail or in your pocket if you slip on a moss covered rock and go for an unscheduled swim. 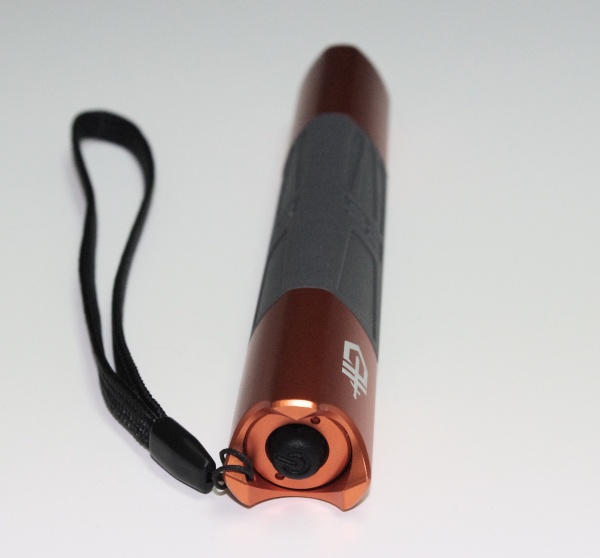 The exterior of the light has a few neat features. It is machined out of aluminum that has been anodized almost a burnt umber shade of orange, which should make it fairly difficult to loose. There is a rubber grip section in the middle of the body, which is triangular in shape. This is surprisingly comfortable if you grip it like a pencil, with your fingers along the sides and is very resistant to rolling away if you set it down on a rock or stump. The rear switch is protected by a crown, which helps to keep the light from coming on unexpectedly and lighting up the inside of a backpack for hours. This crown also allows the light to tail stand, so it can set on the kitchen counter and used as emergency lighting when the power goes out. Even on low power, it puts out enough light to serve this function in smaller rooms, such as sitting next to the sink on the bathroom counter. 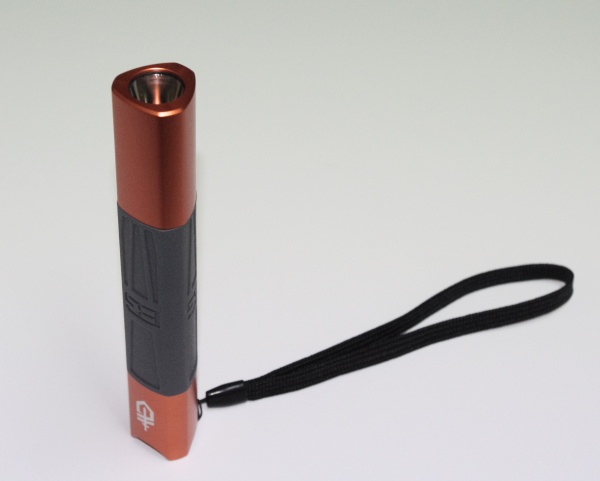 Performance wise, the Intense Torch has an LED bulb, so keeping spares on hand is not an issue. As mentioned, it runs on common AA batteries and is waterproof. What really sets this light apart from the older ones in most kitchen drawers is the microchip that allows the light to have multiple settings. Pressing the power button half way down lets you have a momentary light that runs until you let go of the button. The first click of the power switch turns the light on in High mode, the second click is Medium, the third Low and the forth is a flashing SOS signal, which is quite bright.  The high power setting is a portable searchlight that throws 140 lumens of light for 90 minutes. Medium output is a general use setting rated at 35 lumens of light for eight and a half hours Below is a comparison of the two highest settings, with the fallen tree in the pictures at about a twenty-five foot distance. 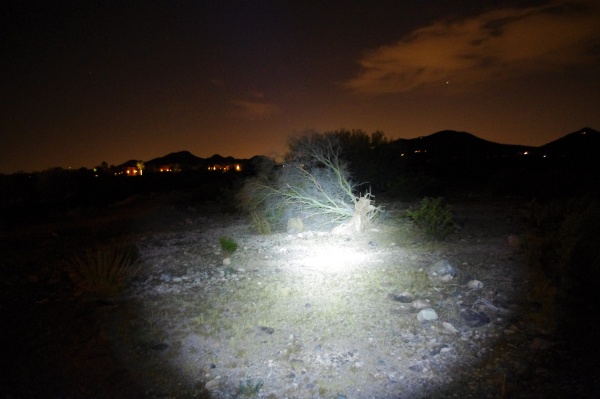 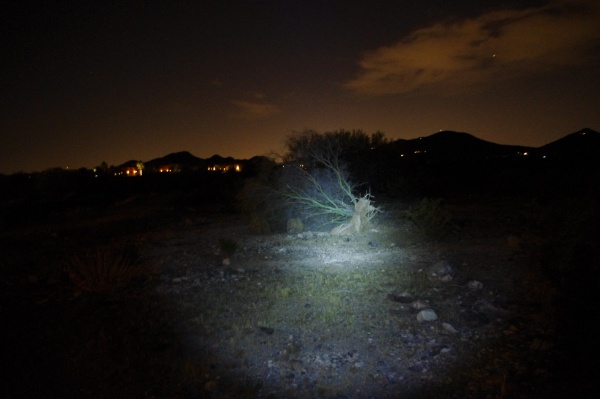 The low power option runs at seventeen lumens of light and seventeen hours of battery life. It is easily enough to navigate around your house in the dark. For comparison sake, it is about the same amount of light put out by the classic American flashlight, the Mini Maglite, but with more than triple the battery life. The Intense Torch on Low power and the Mini Maglite’s output are compared below. 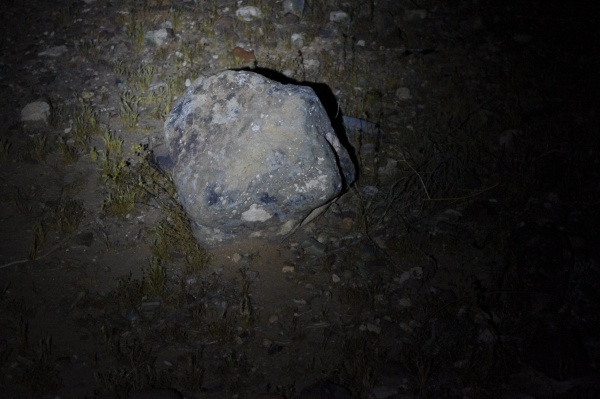 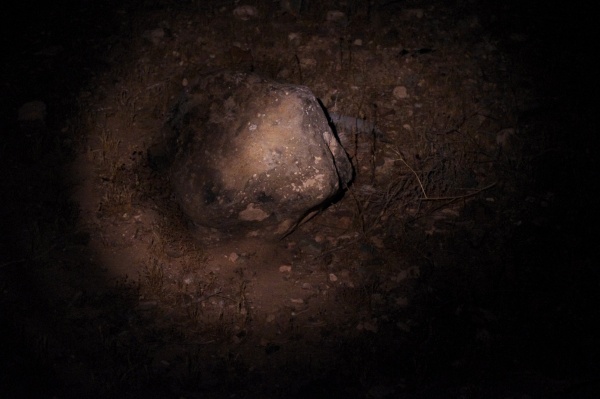 If you are still running an older, incandescent bulb flashlight or an early generation LED flashlight, it really is time to upgrade.Lights like the Bear Grylls Intense Torch offer more light, longer battery life and more durability. Also, the Torch’s ability to have multiple output settings combined with it’s body design lets this one flashlight do multiple jobs. It can be both your high powered light outside when you need to see what made that noise off in the distance and your general use light for around camp or the backyard. It can also let you stretch out battery life, light up just a room and serve as an emergency signal. The Bear Grylls Intense Torch

is a well designed light, with a good feature set, backed up by Gerber’s lifetime warranty.