The IAC Hawk 981R, 982 and 982T shotguns are arguably one of the best home defense values on the market. These are all Norinco’s versions of the Remington 870 with either an optics rail, ghost ring sights or a pistol grip stock, respectively. But, rather than just being a cheap Chinese throwaway, they include a machined steel extractor and metal trigger guard, which are hard to find on the budget minded Remingtons. That said, if you take one home, the first thing to do is take it apart for a good cleaning. 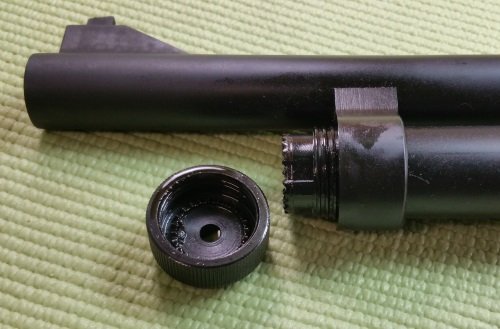 Since the IAC Hawks are imported, they are shipped sealed in a plastic bag with two desiccant packs and a good coating of oil. But, these rust preventative steps are not the same thing as proper lubrication. So, we’re going to walk step by step how to properly take a Hawk 982 type shotgun apart. The first step is to work the pump action once or twice to make sure it is not loaded and then put the safety on without pulling the trigger. Then, unscrew the magazine cap and set it aside.

Next, carefully slide the barrel forward and off of the magazine tube. The barrel can be set aside for later cleaning as well. 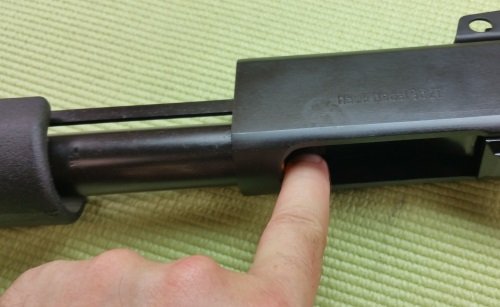 Next, pull the pump back about two or three inches, so that it is in the middle of its range of motion. Then, reach up inside the feeding port on the bottom of the receiver and feel for the small release lever on the inside wall. There is one on both sides of the receiver. Pressing one or the other will allow the fore-end assembly to slide forward, off of the magazine tube. The bolt and carrier just sit on top of the action bars, so take care to slide everything out slowly. 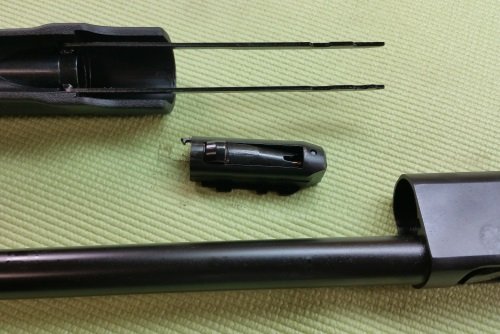 Now is a good time to check out how the bolt, carrier, and action bars all nest together so that everything can be reassembled properly after a good cleaning. 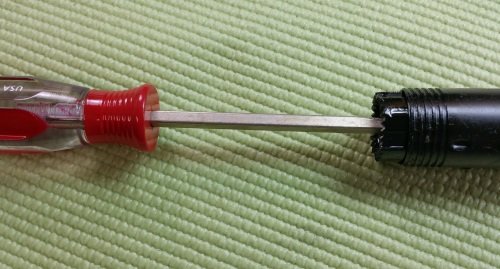 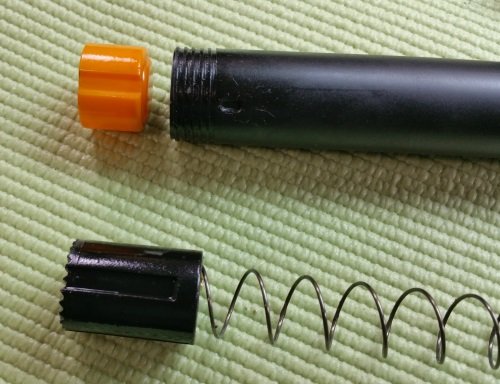 The orange plastic magazine follower will usually try to stay behind in the tube. This is not really a problem, as a cleaning rod, wooden dowel or even the magazine spring can be used to push the follower forward from the receiver end of the tube. It will usually stop at the dimples that held in the spring retainer but is easily extracted with one finger  down the tube and a slow half turn. 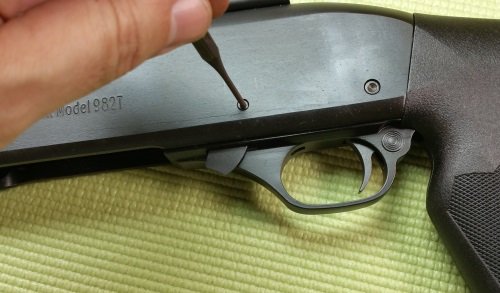 The trigger assembly is held in place by two pins. These are easily tapped out with a punch. Putting a book or riser block under the stock will help to provide enough clearance for the pins on the back side of the action. Take care to avoid having the punch slip, as this can add a scratch and considerable character to the side of your shotgun in less than a second. 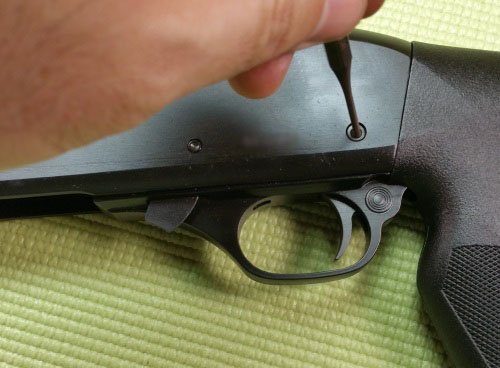 Both pins should come out easily, once they are tapped loose of the spring which holds them in place. This is a similar design to the trigger pins in an AR15. Tapping out the front, smaller pin first and then the rear, larger pin is usually the easiest option. 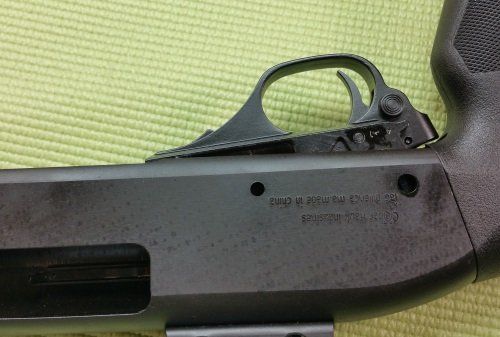 The trigger group should just lift free of the action once both pins are removed. It can take a little wiggling on a new shotgun, but nothing should have to be forced out. Lift the rear of the group up first and then angle the front free of the receiver.

That is all there is to disassembling an IAC Hawk 982 for cleaning. A rag or two and some CLP is all that is needed to get the exterior of the shotgun cleaned up. Once the outside looks clean, let the CLP on the outside sit about five minutes and then come back with the second, clean rag. I was able to get off a more machine shop dust and oil. A shotgun cleaning kit will help with the inside of the barrel. The trigger on my 982T was surprisingly smooth after a gentle wipe down and adding some oil on the contact points. Also, I’d suggest running a few patches down the magazine tube, as well as wiping down the spring and follower, as mine came rather oily. Once it is cleaned and reassembled, take your 982 out shooting!