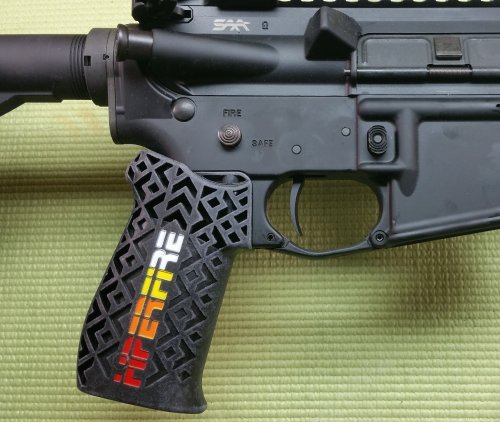 At last year’s SHOT Show, Hiperfire had some pre-production samples of their Hipergrip on display for folks to check out. At the time, I remember thinking how surprisingly comfortable the grip design actually was when held. Since then, my AR has been patiently waiting for another upgrade until this was released. 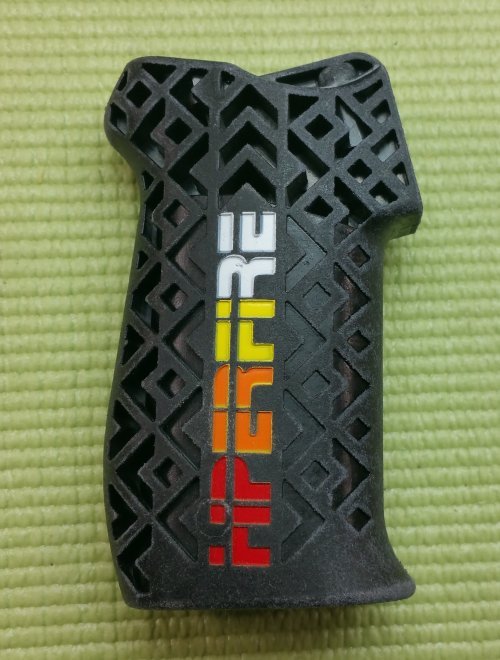 There are four versions of Hiperfire’s Hipergrip currently available, ranging from twenty-five to forty-five dollars each. The biggest choice is between a smooth or slightly textured finished and there is a colored logo upgrade available for each of these. We are taking a look at the textured finish version with the colored logo. I have handled both and the difference is not huge, but I do prefer the slightly “fuzzy” feel. 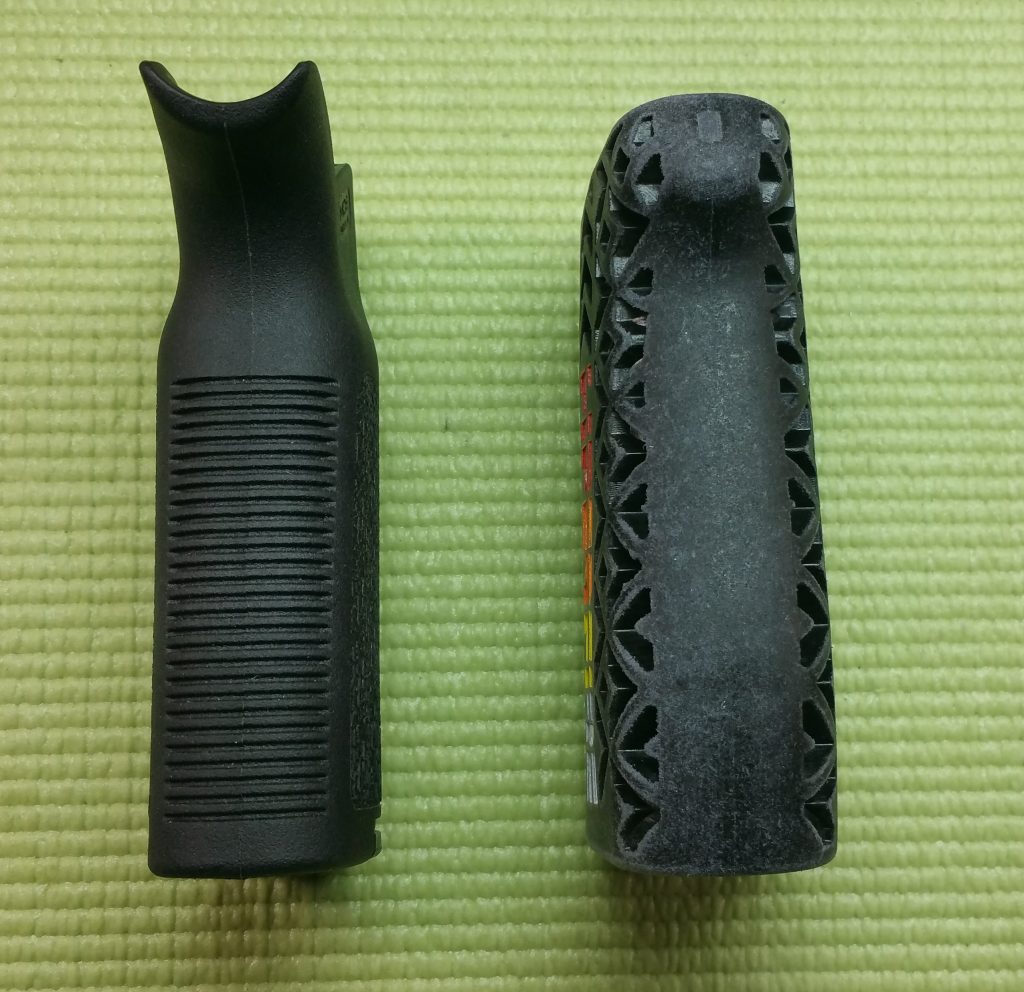 The Hipergrip is all about ergonomics. We are picturing it side by side with the standard Magpul MOE pistol grip for comparison. The rear of the Hipergrip has a distinct bump at the top that provides a good indexing reference point. The backside of the grip is smooth, with barely visible mold lines. 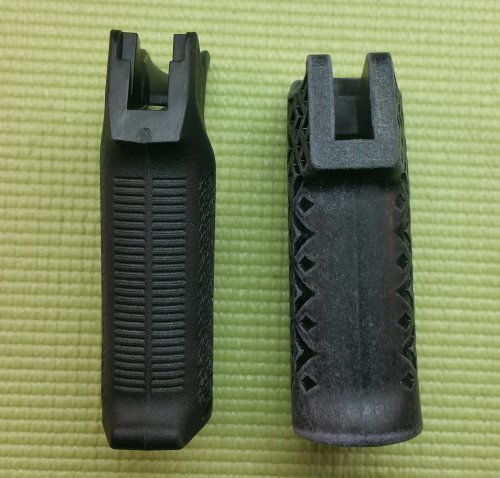 The Hipergrip is noticeably wider than many other AR15 grips. It does a good job filling the hand, without feeling too bulky. This “filling the hand” approach is designed to help prevent accidental bump firing by giving the shooter better control over the rifle’s recoil in the shooting hand. The front of the bottom lip has a nice flair with smooth edges all around. We measured the width of the grip as 1.35 inches at the midpoint, which is just a little wider than a large frame Glock, as a point of comparison. 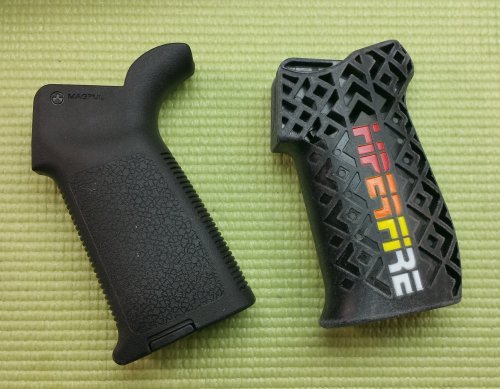 The angle of the Hipergrip feels very natural and comfortable on the wrist. This was true for both right and left handed shooters. Even with the geometric texturing on both sides, there is nothing noticeably sharp or poking. The squishy parts of the palm “flow” into the cutouts, holding the hand in place. We were able to maintain a solid grip with the shooting hand while only applying light pressure. 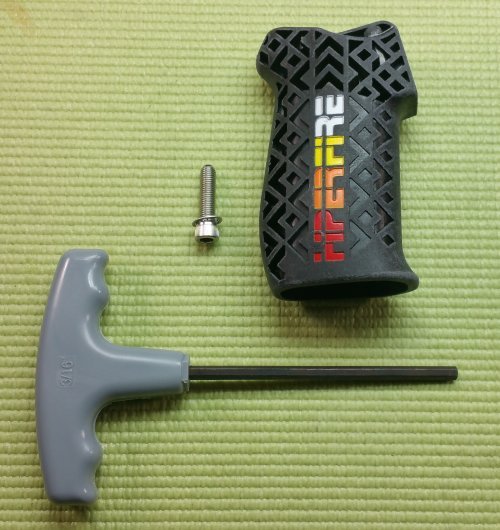 Installing the Hipergrip is the same process as installing most any other AR15 grip. The package contains the required bolt and washer, while a 3/16″ hex wrench will be needed to reach up inside the pistol grip. 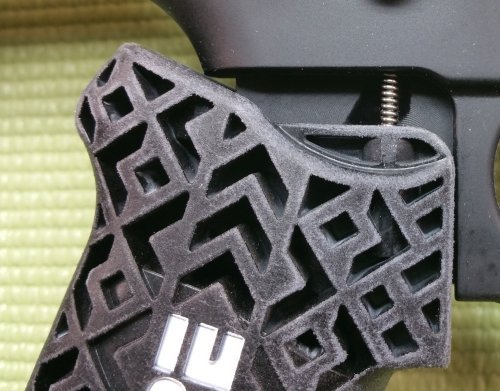 First, remove the existing grip slowly, while being careful not to loose the spring and detent that the pistol grip holds in place. The spring should stay in the hole on the lower receiver. 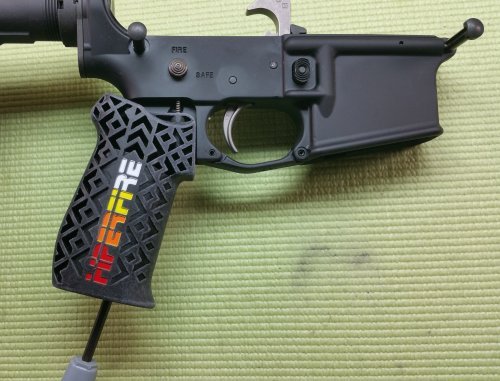 Slide the Hipergrip on the lower, while being careful to align the tail end of the spring with the corresponding hole in the top of the Hipergrip. Then, just push the new grip all the way up and into place. Use the hex wrench to install and tighten the bolt in the butt end of the grip and the work is done! 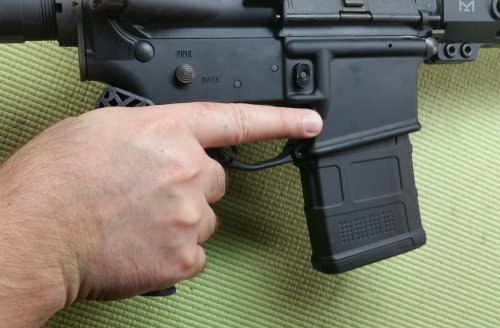 We’ve put the Hipergrip into both smaller hands and decently sized paws without a complaint. This grip holds the finger in line with the trigger, so that it naturally points in the same direction as the rifle’s barrel. After a little use, it is comfortable enough that it seems natural and you don’t even think about it. The Hipergrip is the most comfortable grip that I’ve ever had on an AR15.